1854 | E.L. Meyer Arrives to the United States from France

The roots of the First National Travel Agency go back to E. L. Meyer, early day settler, who arrived in Hutchinson, KS in 1872. At the age of 5, Meyer, along with his parents came to the United States from France in 1854.

1878 | Appointed as a Representative to the Industrial Exposition in Paris, France

In 1878, United States President Rutherford B. Hayes requested the Governor of Kansas appoint a representative to the Industrial Exposition in Paris, France. E.L. Meyer was named. Although he probably did not remember much of his native city and country, he spoke the language and was eager to go.

Shortly after returning to Hutchinson, Meyer applied for an appointment to be an agent for the sale of steamship tickets, and since then four generations of the Meyer family have been involved in promoting travel. From 1887 through 1946, steamship tickets and later airline tickets, tours, etc., were sold from the First National Bank lobby at Sherman and Main.

In 1947 the agency adopted the name, First National Travel Agency, hired its first full time staff member and moved to a desk in the Leon Hotel. Starting with 1954 a series of office moves took place, until 1974 when the agency settled at 201 East First Street for nearly 30 years.

In early 2003, the office relocated to 524 E. 30th and in 2009 we moved back to our original home in the First National Bank Building, where you will currently find us on the 4th floor.

The Thought, The Process, The Adventure

In the early years the entire information held by the agency on steamships throughout the world was housed in a three drawer file cabinet. Today the employees in Hutchinson operate numerous computer terminals, occupy over 1,000 square feet of space filled with thousands of folders, books , and other literature, and continue to nurture the travel “bug” that bit E.L. Meyer the first time he really saw Paris in 1878. We think he would be proud of the tradition of world travel the people of Hutchinson are noted for, and that he started. 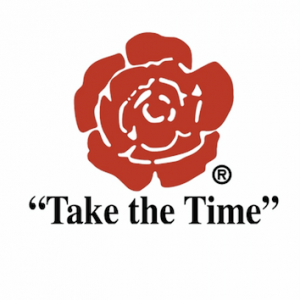 “Take the Time” Logo by Nation Meyer, Chairman of the Board

In the fall of 1962, I was privileged to host a group of bankers and their wives to Europe. It was a typical mini-grand tour of Europe: Paris, Lucerne, Florence, Rome and London.  Outside Stokepoges Church near Eaton College, we were admiring the beautiful roses blooming in the courtyard. One of my fellow bankers, who was well past 70 said, “You know, I probably could have come to Europe several times before now, but this is my first. I have really enjoyed the experience; however, this rose garden reminds me that I’ve never taken time to smell the roses.” That comment made an impression on me, and I filed it away for future use.

In 1965, I was asked to write an article on travel, and again the “Take the Time” theme came to mind.  In 1974,  I asked Winston Schmidt, architect and artist, to design a rose that could be used as a logo.

In 1975 we were able to have that rose trade mark registered at the United States Patent and Trademark Office.

“Take the Time” and the stylistic rose have been a theme of our travel agency for many years. We recommend the thought, the process, and the adventure. We strive to do everything possible to ensure you enjoy travel and in particular, smelling the roses.